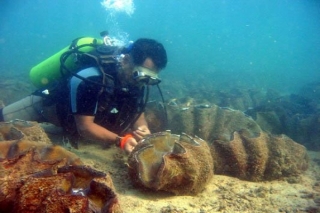 The town of Agno is also known in having Sanctuary of Giant Clams “Tridacna gigas” which is the largest living bivalve mollusk. They can weigh more than 200 kilograms (441 lb) measure as much as 120 centimeters (47.2 in) across, and have an average lifespan in the wild of 100 years or more. In Philippines they are called “Taklobo” and it is one of the most endangered clam species. In the coastal waters of Abagatanen was sheltered the 29 remaining giant clams.

According to local environmentalists, six of the giant clams died because poachers have taken their meat and leave the shells in the sea. Concerned Divers of the Philippines (CDP) are supportive in the giant clam stocking to prevent further death of the remaining clams and let them survive to lay their eggs to enhance bio-diversity and would lead secured food resources in the area.
The town is bounded by the South China Sea on the west, and the towns of Mabini on the east, Bani, north and Burgos, south. It is just 280km. away from Manila, 75km.away from Dagupan City and 28km. away from Alaminos City the home of the Hundred Islands.